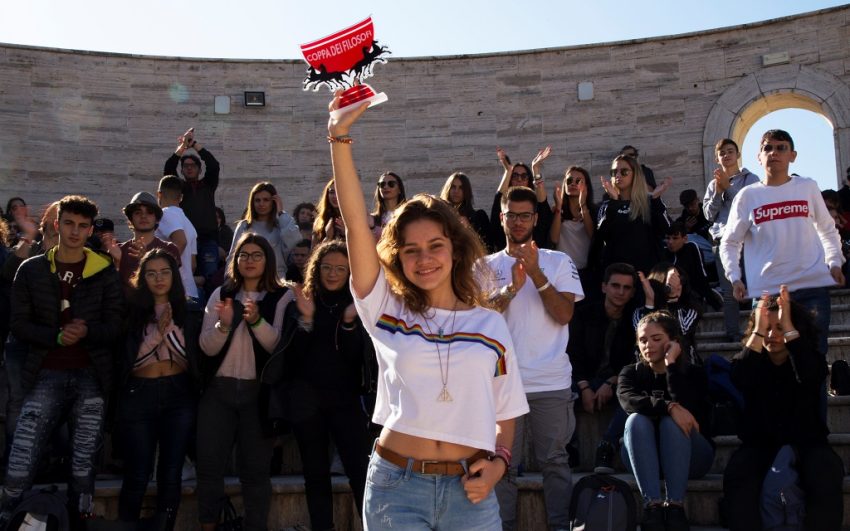 In ancient Hellas, the realization of kalòs kai agathòs - the ideal of "beautiful and good" - was the result of a continuous construction of the self, which took place above all through confrontation with the other, in an authentic and healthy competition in which value was mutually recognized: the agòn was, therefore, a way to decline further forms of relationship .

At the Philosophy Festival in Magna Graecia®, we have created a space where you can experience the “beautiful and good” confrontation among students, making our philosophical community even more lively. During FFMG's Agòn, each school presents the creations and works of its students, as a result of their creativity and talents and synthesis of a feeling of tolerance and acceptance that reflect the values of the festival.

The artistic and philosophical categories of Agòn

FFMG's multidisciplinary philosophical Agòn challenges high school students to show their skills, talents and knowledge through an innovative and interesting experiential philosophical path, designed to thrill and turn on the minds. The Agòn, declined in specific disciplinary areas, uses languages familiar to youth to stimulate confrontation and let the students express their point of view on selected philosophical themes. At the end of the competition, the “Philosophers' Cup” is awarded to the best talents, during a ceremony.

In Filosofando , the philosophical-literary competition dedicated to composition in prose or verse, thought becomes words. Young participants can try themselves at philosophical texts written by their own hand, poetic compositions, theatrical monologues or philosophical dialogues between two or more people.

In Filosofilm , category dedicated to audiovisual products, the young competitors - using unpublished material they own - make real cinematic short films (from 3 'to 7', including opening and closing credits) on the theme of the Festival edition. The short film format is the most suitable means of artistic and creative expression to represent Philosophy, as it allows to update ancient languages, enhancing them with new content.

The Koreo Agòn, dedicated to choreography and dance, is a challenge between schools, each presenting a short choreography pièce (of 2′-8 ′), based on a musical genre, with a free number of participants; two teams (crews) compete, performing their choreographies.

Musiké , the original music competition for bands, solo musicians and singers, aims to promote the composition of musical pieces (of 2' to 8') and offers songwriters and non-professional musicians the opportunity to express their passion for music, to increase their skills and to perform - often for the first time - on a real stage. Some of the talents discovered at the Philosophy Festival in Magna Graecia® are now rising stars of pop music!

Rapoiesis is a real challenge to the rhythm of rap, in which two competitors face each other on the beat with rhymes, improvising a lyrical composition on rhythm (the term "rap" means Rhythm and Poetry).

The "sound poetry" competition Slam Poetry represents the first poetic challenge between the Italian schools. The Slampoiesis competition is an engaging way of proposing poetry to young people, in a new and revolutionary way, to recompose the link between the poet who writes and the audience who listens. The sound poetry stimulates you to express your feelings through verses, kissed and alternating rhymes, metaphors and rhetorical figures.